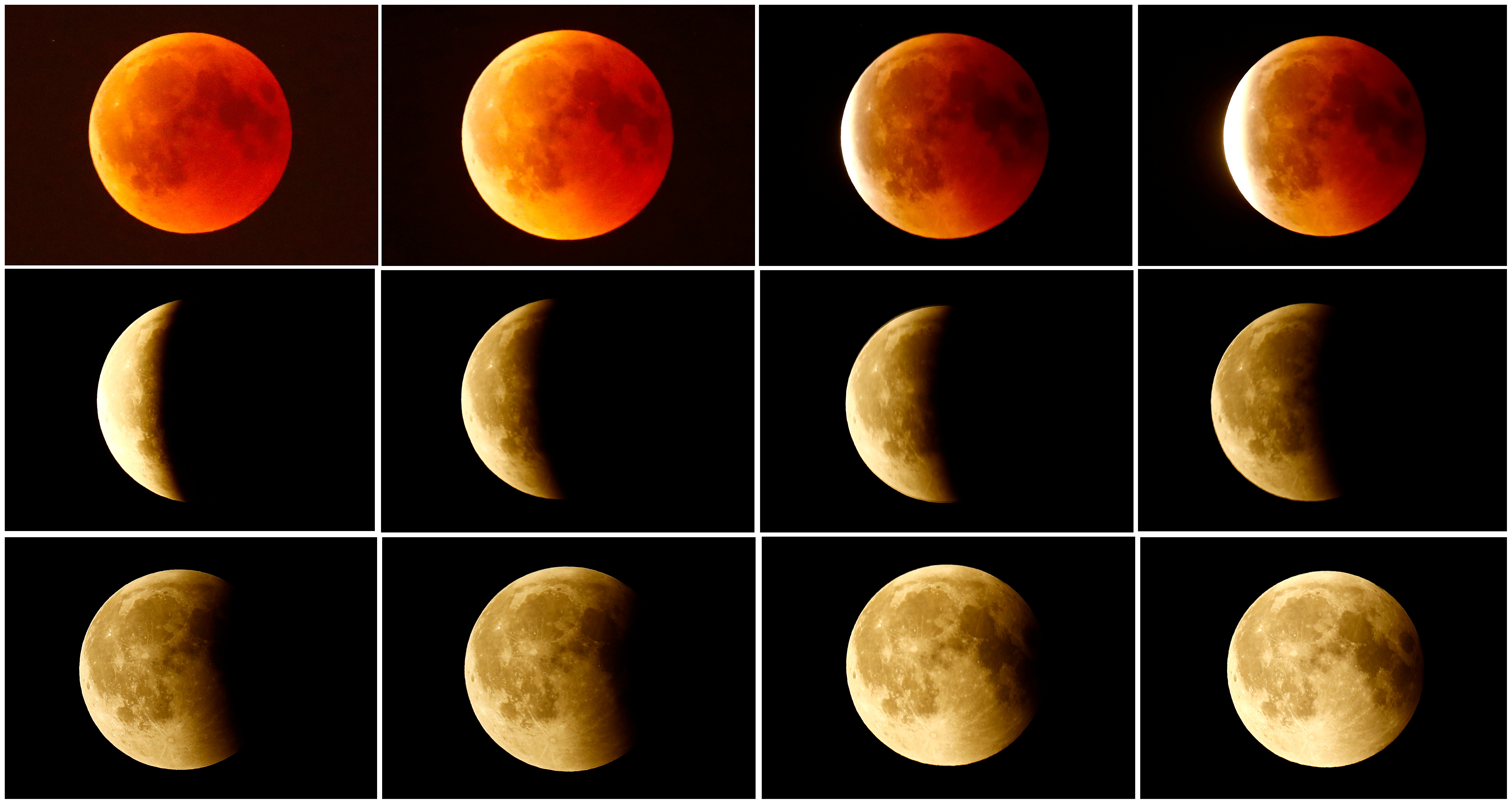 There is no such thing as a “blood moon.”

It’s mostly a media invention, driven largely by efforts to get readers to visit news websites—through a tactic known as “search engine optimization”—that likely began thanks to nonsensical apocalyptic “prophecies” promoted by a handful of fringe Christian pastors and writers in 2014.

It’s not clear who first came up with the term “blood moon,” but all it means is a total lunar eclipse. To be fair, a total lunar eclipse is a relatively rare astrological event—from any given place on Earth, you can only see one about once every 2.5 years—and they can look very cool, if you get clear skies and a good viewing spot. What happens is the Earth gets between the sun and the moon, fully blocking all direct sunlight from hitting what is normally the bright side of the lunar surface. Some sunlight does reach the moon, but it’s refracted by the Earth’s atmosphere, turning it a reddish color—hence, “blood moon.”

Much of the media is calling the total lunar eclipse that will occur tonight (Jan. 20) a “super blood wolf moon.” The “wolf” part is actually real: In the tradition of certain Native American cultures, each full moon of the year was given an identifying name. The year’s first full moon was the “wolf moon,” according to Farmer’s Almanac.

The concept of a “supermoon” is just as fake as a “blood moon,” but since the scientific term for this is a “perigee-syzygy moon,” it makes sense that we’d come up with something less jargon-y. On the other hand, “blood moons” already had a perfectly good name.

This is certainly an incomplete record, but it’s instructive to see how often two of the US’s newspapers-of-record, the New York Times and the Washington Post, have referenced “blood moons” in their history:

In their respective 168- and 142-year histories, the Times and Post never once used the term to refer to any sort of astrological phenomena until 2014. 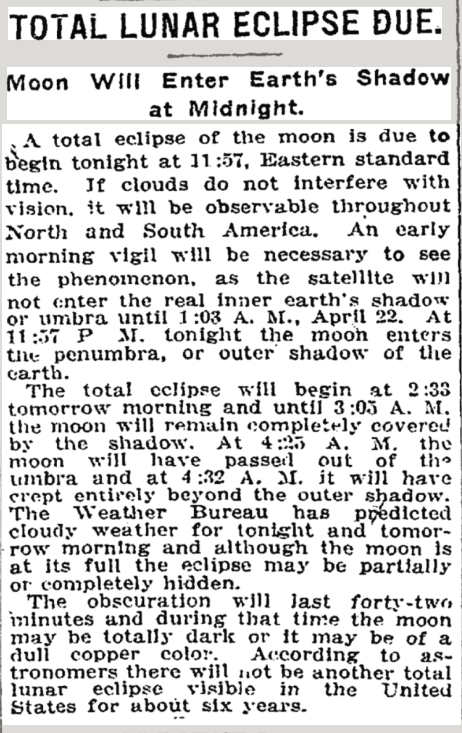 They did both, however, extensively use the phrase “total lunar eclipse.” The first mention found on the archive-search tools on the Times’ website dates back to April 1921. 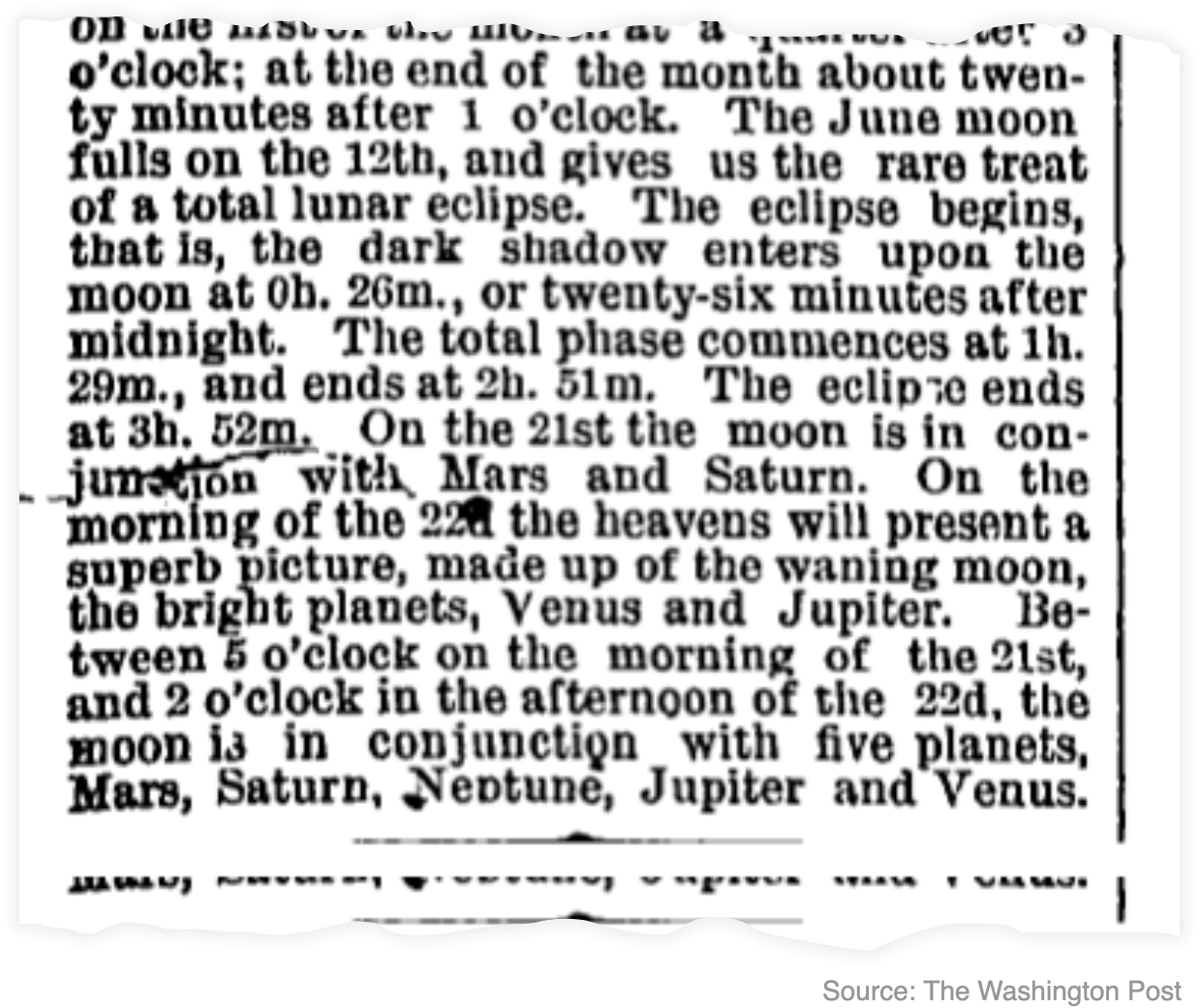 The Post’s first use of “total lunar eclipse” that is findable online, using ProQuest, is even older, from June 1881.

The “blood moon” trend exploded in 2014, when the first in a tetrad of full lunar eclipses—that is, when there are four full lunar eclipses in a row with no partial eclipses between them—occurred. A group of fringe Christian clergymen and writers latched onto this astrological event, reading it as a sign of end-times based on a very stretched reading of a few biblical passages. They published books on what would become known as the “blood moon prophecies,” with titles like:

A little media attention to them was all the internet needed. Here’s a record of Google search interest in the phrase “blood moon” and “total lunar eclipse” going back to 2004:

Since Google became the portal to the internet for a growing number of users (Alexa ranks it the world’s biggest website), publishers have increasingly had to rely on ranking highly on the site’s search results pages. That often means chasing trends centered around specific search terms.

By looking more closely at what the Times was actually writing about—and the language its writers used—you can see the journalists first attempting to be creative when given the assignment to write about “blood moons.” A moon-themed crossword puzzle is fun! But then their frustration seeps in. For example, a 2015 opinion piece asks, in exasperation, why we are so obsessed with “blood moons” but can’t get our stuff together to save our own planet from climate change. An article published today (Jan. 20) is subtitled “You don’t really need to call it a ‘Super Blood Wolf Moon.’”

Worse, though, are the bizarre attempts at integrating the extremely popular search term into stories where it really makes no sense. Take a story from February 2018, about life in Kobani, a small Syrian town destroyed by regional war. For some reason, the piece is framed narratively by the “blood moon” that occurred that month. It even manages to fit in the full search term du jour of the time, “super blue blood moon.”

This is not to pick on the Times; nearly everyone in media now plays this game. And you should, by all means, go out and try to see the total lunar eclipse tonight. But maybe just call it that.